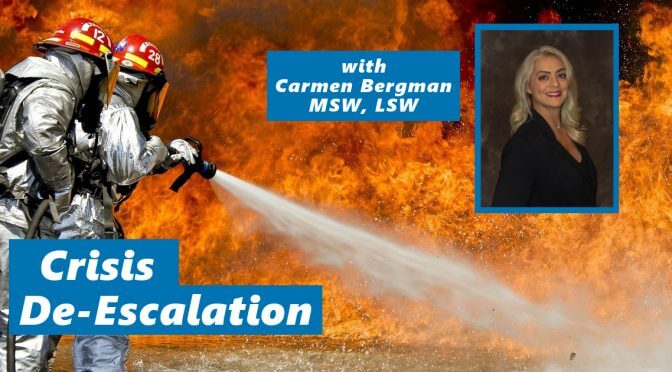 Think back to the last time you witnessed another person become very upset or agitated. What caused them to feel this way, and what did they do in response? Did you or another person attempt to calm them down? What did you try, and how effective was it? Was the situation defused successfully, or did it escalate?

When someone is extremely annoyed, angry or afraid, they may react with hostility toward the person or situation that caused these feelings. This can often lead to conflict between two or more people, which might include verbal argument or even physical violence. In some situations, the person may enter a state of crisis, which Merriam-Webster dictionary describes as “a [sudden and violent] attack of pain, distress, or disordered function.”

A person who is in crisis may be especially dangerous during a conflict. Because they are highly agitated, they may act on their emotions without stopping to consider the consequences, which could bring harm to themselves or others. Knowing how to effectively calm a person in crisis— known as crisis de-escalation or intervention—is a highly valuable skill in these situations.

However, de-escalation can be a complicated task. The intervening person must be able to assess the situation and react in a way that will disarm it rather than inflame it. They must understand what has upset the person in crisis and know which words and actions have the best chance of calming them down.

To learn more about crisis de-escalation, we spoke with Carmen Bergman, MSW, LSW, a school-based therapist in Fort Wayne, IN. Bergman is a Master-level instructor of Nonviolent Crisis Intervention, a popular de-escalation model taught by the Crisis Prevention Institute. As an experienced trainer in the CPI model, Bergman explained how someone can identify when a crisis is developing, what they can do to defuse that crisis, and how they can stay calm and focused during the difficult work of de-escalation.

Spotting the Signs of Crisis

To begin, it’s important to note that the goal of de-escalation is to defuse crises before they reach the point of physical aggression or violence. “When you talk about nonviolent crisis intervention, some people immediately think of holding skills and how to protect yourself from physical attacks. But that’s only a small chunk of it,” Bergman explains. “All the rest is about preventing escalation to the point where it becomes physical.”

Under the Nonviolent Crisis Intervention model, also known as the CPI model or simply CPI, the person doing de-escalation must think about the safety and well-being of everyone involved in a crisis situation. Bergman says, “The main philosophy is care, welfare, safety and security for all. It’s not just for the person who’s in crisis and the person handling the crisis; it’s also for any people who are witnessing the event.”

The first element of successful de-escalation is early identification that a crisis may be developing. Many factors go into this process, but it largely involves being aware of the person’s behavior and the larger situation at hand. Bergman explains some of the things she considers when looking for signs of crisis: “I’m assessing what’s in the room and who is in the room. I’m assessing nonverbal communication, because it’s not what someone says, but how they say it. I’m looking at facial expressions, I’m looking at body language, I’m looking at the spatial piece, like how close they are to me and how close I am to the exit. I’m also looking at how they’re speaking—their tone, their volume, and their cadence.”

Once we’ve assessed the potential for crisis—or how far the crisis has already progressed—we can begin to determine the appropriate response. Bergman illustrates what this might look like:

“As I’m collecting all this information, I use what’s called the ‘decision-making matrix’ to assess the situation. Whether it’s somebody I’ve worked with before or somebody I’ve never worked with before, I take all the information that’s coming in and continually use the decision-making matrix to assess: Do I just need verbal de-escalation? Or do I need to use disengagement skills, like protecting myself if somebody tries to hit or kick me, or if they’re grabbing at me? Or is it to the point where there’s immediate risk of harm to myself or others? Do I need to use a holding skill?” 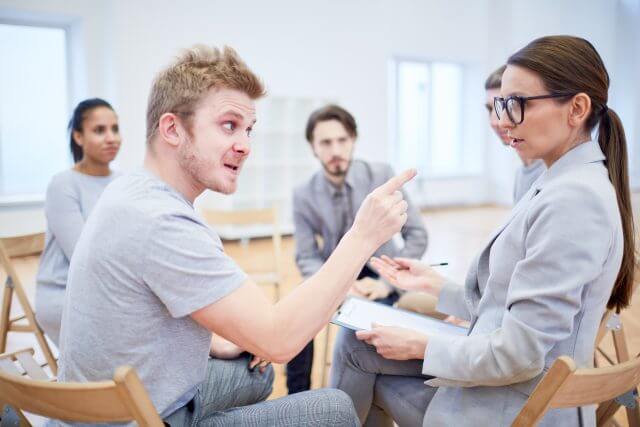 Whenever possible, de-escalation should begin with a conversation between the person in crisis and the person attempting to intervene—otherwise known as verbal de-escalation. As always, the goal is to defuse the situation by making the agitated person feel heard, understood and respected.

The way we speak to a person during de-escalating is just as important as the words we say to them. “When I teach de-escalation, I talk about paraverbal and nonverbal communication. Paraverbal communication is the tone, the volume and the cadence,” Bergman explains. “For example, I immediately ask everybody, ‘Who speaks sarcasm as a second language?’ Because if you approach someone with sarcastic, dry humor to try to lighten the mood, it’s going to make it worse. Put the sarcasm away and just use very natural, even-keeled, even-toned patterns of communication.”

The volume of our speech is also important in these situations, and we can even use it to help lower the level of tension. Bergman says, “Sometimes if somebody is screaming and yelling, I’ll bring my volume down a notch, and sometimes they’ll match me. And I’ll bring it down a bit more, and they’ll match me again until we’re having a nice, even, calm conversation.”

Other strategies for verbal de-escalation include: lowering yourself to the other person’s eye level if you are taller than them, which can make you appear less threatening; persuading them to sit down with you, which can help them feel more calm; and standing beside them rather than across from them, which can make the conversation feel less confrontational.

It’s also important to remember that the individual in crisis may respond negatively to your de-escalation attempts, so you should try not to take any insults or aggression personally. Bergman explains,

“We talk about rationally detaching and not taking it personally. You know, it’s not about you. Sometimes we can get very egocentric, like, ‘If you don’t respect me, I don’t have to respect you.’ That’s kind of like two fools arguing; nobody wins in that situation. There have been times when I’ve taken it personally, and I needed to step back and take a breath. It’s not about me, but it became about me when I let that power struggle happen. If I’m met with rudeness and disrespect, I’m going to still respect the other person as a human being, because that’s who I am, and that’s my character.” 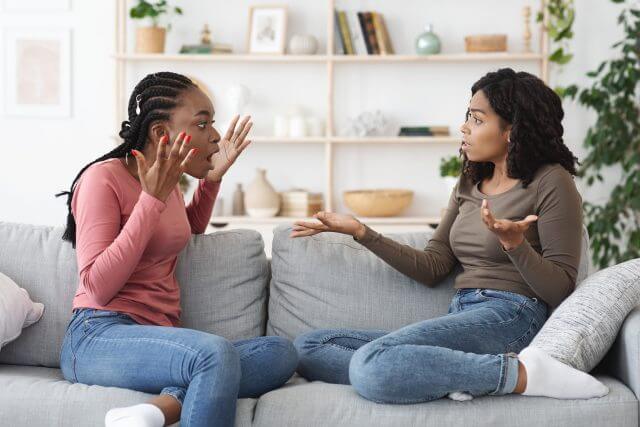 Unfortunately, crisis de-escalation can be very stressful work. It can be difficult to deal with aggression and negativity without reflecting it back to the person in crisis. Therefore, we need to know how to manage our own emotions and mental well-being in order to stay focused and effective during de-escalation.

Self-awareness is the first component of this. In order to regulate our emotions, we need to monitor how we feel and understand what things are likely to upset us. Bergman says, “What makes you anxious? What are the things that make you fearful? What are you worried about?” Once we know the answers to these questions, we’ll be better prepared to handle upsetting words and actions without becoming agitated.

Self-care is another vital part of maintaining resilience. Dealing with other people’s crises is mentally and emotionally taxing, which is why we must find ways to replenish that spent energy. Bergman refers to this as “refilling your Care Cup”: “We’re absorbing so much negative energy that we need to do something positive to fill up our Care Cup. We’re pouring so much out that if we don’t fill it up again, we’re not going to be useful anymore.” Normal wellness behaviors like getting plenty of sleep, eating a health diet, exercising regularly and practicing mindfulness can help with this.

Bergman points out that de-escalating with a team can be an excellent option if others are available to help. In these situations, one person can lead the de-escalation while the others provide support as needed. “When you respond as a team, sometimes the leader is the first person who arrives, sometimes it’s the person who has the best rapport with the individual, and sometimes it’s just the person who is most competent and confident,” Bergman says.

Finally, sometimes the best we can do just isn’t good enough. When this happens, it’s best to cut our losses and let someone else take over, if possible. “When I teach, I talk about ‘tap outs,’ “ Bergman explains. “If somebody is starting to add fuel to the fire—if you’re trying to de-escalate, but the person is mad at you—have somebody else step in. It’s not that you aren’t doing your job well enough. It has nothing to do with you. It’s just what’s best for that person at that moment.”

Conflict and crisis can be frightening and stressful when they occur. A person who is experiencing an emotional crisis may pose a danger to themselves and others, which is why proper de-escalation is so important.

We encourage you to use the information and strategies in this blog when attempting to de-escalate someone who is in crisis. However, you shouldn’t hesitate to seek out professional assistance when necessary. If you ever feel overwhelmed or afraid for your safety while attempting de-escalation,  get help from someone with more training and experience handling difficult situations!

With the right help, crises can be de-escalated and individuals who experience them can get the behavioral health care they deserve! 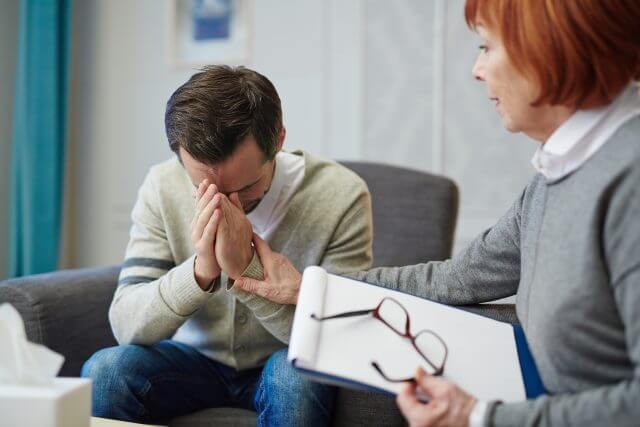 For advice on handling other types of difficult situations, we recommend reading our blog posts on Conscious Discipline and domestic violence intervention below!