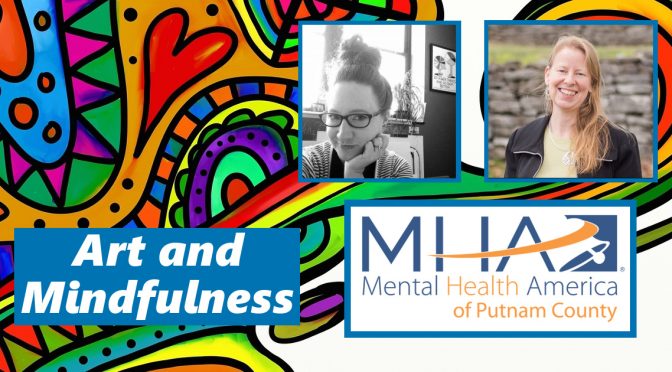 “Creativity is piercing the mundane to find the marvelous.” — Bill Moyers, American journalist and political commentator

Over the last decade, mindfulness has become something of a buzzword in popular culture. However, the practice of focusing one’s attention entirely on the present has been around for thousands of years, likely originating with the ancient Buddhists of India. What’s more, mindfulness-based interventions have been used by psychologists since at least the 1970s and 1980s.

Since then, much evidence has shown that practicing mindfulness can have positive outcomes for mental health and wellness. For example, research has shown that people who are predisposed toward mindfulness are more likely to be psychologically healthy. When it comes to interventions for behavioral health, studies have shown that mindfulness exercises can help people cope with stress and the symptoms of anxiety and depression. And some research even suggests that mindfulness could be a protective factor against the development of certain mental health conditions.

One of the most common ways to practice mindfulness is through meditation, but this is an activity that can feel intimidating for some people. Many of us picture meditation as something mystical and mysterious that we wouldn’t even know how to begin, let alone perform successfully. But what if there was something we could do to practice mindfulness that came a little more naturally—something as simple as drawing shapes on a sheet of paper?

Fortunately, simple artistic activities like doodling can actually be an effective tool for practicing mindfulness. We spoke with Holly Combs, an Indianapolis-based artist and public speaker, and Karen Martoglio, Executive Director of Mental Health America of Putnam County, to learn more about the mindfulness benefits of artistic activities.

Art as an Expression of Mindfulness

According to Holly Combs, art isn’t something a person does to create a beautiful work or object. Rather, art is a way to get in touch with our inner selves. “Art is what I consider a ‘red carpet’ for difficult topics—things people don’t know how to talk about,” she says. “There are literal things you can talk about. For example, ‘That building is a brick building. They used mortar to put it up.’ But emotions are harder to talk about because they’re more abstract and personal.”

Combs has built a career out of helping people cope with difficult emotions through art. Since 2014, she has conducted workshops with everyone from elementary school students to government officials and corporate executives, training them in the use of art to express their deepest emotions and live in the present. Some of her most impactful work has been with juvenile offenders in the criminal justice system, with whom she has used artistic expression as a tool for rehabilitation (and which she spoke about in her well-received TEDx Talk). She explains:

“When I worked in detention centers, I realized that the juvenile offenders didn’t feel like they could talk to me. So I said, ‘We’re just going to draw. I’ll put out pencils, and here are some geometric patterns on a page that you can color-in if you’d like.’ Letting them do something with their hands and their minds helped them to open up.

One day I went to a maximum-security juvenile detention center, and I was working with all the kids, and the weirdest thing happened: a guard sat down and joined in the activity. And then the counselors sat down. And then the therapists sat down. And I realized, ‘Oh, this is for everybody.’ “

For Combs, this experience demonstrated art’s power to instill mindfulness in the artist. She says, “If I were to tell kids that the action of putting pen on paper is bringing them to the present, to this moment, they would think it’s BS. But I don’t have to over-explain it, and I don’t have to teach them mindfulness. The moment they’re with me, and focused, and sharing—that’s mindfulness.”

Karen Martoglio, Executive Director of MHAoPC, shares Combs’ perspective on art and mindfulness. “Art is a mechanism to engage your mind. You need to focus when you create art, so you can tune out some of the noise in your life. It can refocus your attention and help you not get bogged down in the minutiae of any problems you may have,” she says.

For anyone who would like to begin practicing art-based mindfulness, Martoglio recommends giving “Zentangle” a try. Started by a husband and wife duo from Massachusetts, Zentangle is a method of creating artwork from simple, structured patterns. While at its core not very different from the drawing exercises that Combs does with juvenile offenders, Zentangle is specifically designed to be a relaxing exercise that encourages meditation and mindfulness. Martoglio explains:

It’s an opportunity to relax and free your mind of worries by concentrating on a task. It combines meditation and attention refocusing in an activity that’s really quite simple, but which also produces something beautiful. It’s not only a mindfulness practice that clears your mind, but when you get done, you actually have something to show for it, which I think is really rewarding. And if it really clicks with you, it’s something you can do anytime, anywhere. You don’t need any special equipment. If you have a piece of paper and a pen, you can just go for it. So, I think it’s a win-win on many different levels.”

Although art and mindfulness can be helpful tools for coping with difficult life situations, it’s important to note that mindfulness practice is not psychological treatment. If you suffer from a mental health illness, we strongly encourage you to seek professional help.

If you’re interested in learning how to practice mindfulness through art, MHA of Putnam County is holding an “Intro to Zentagle” class at 10:00 a.m. on Saturday, November 23rd. If you live in or near Greencastle, IN, consider stopping by for some guided instruction on art and mindfulness! (Pre-registration is required.)

Additional details and contact information can be found in the flyer below.