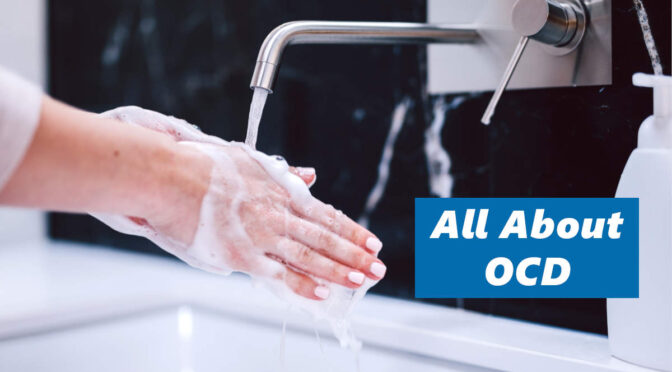 Have you ever felt that something in your environment was not quite right?

Maybe you’ve been lying in bed at night and started to wonder if you locked the front door after coming home or turned off the oven after cooking dinner. Perhaps you’ve felt a bit dirty after engaging in a physical activity and decided to wash your hands or take a shower. Or maybe you’ve noticed that your home has become disordered and spent a few hours tidying up.

If you’ve ever experienced a situation like one of these, then you know that they generally produce a mild amount of anxiety. This anxiety usually isn’t too troubling. It draws our attention to some situation that might be unsafe for us, and it motivates us to fix the unsafe situation. Then, having served its purpose, the anxiety subsides.

However, sometimes a person can have a very strong, exaggerated anxiety response to everyday situations like the ones we’ve described. This is precisely what people who have obsessive-compulsive disorder, also known as OCD, experience on a daily basis.

OCD is an anxiety disorder characterized by intrusive thoughts that cause anxiety and repetitive behaviors that a person performs to reduce this anxiety. It’s estimated that 1 in 100 adults and 1 in 200 children live with OCD in the United States. However, the ongoing COVID-19 pandemic has worsened the symptoms of many people living with OCD, which makes this disorder especially important to discuss right now.

In this blog post, we’ll explain the basics of obsessive-compulsive disorder, including how it works, who is susceptible to it, and how it can be treated. We’ll also include some thoughts and insights about OCD from our Chief Clinical Officer, Robb Enlow. We hope this information will help you know what you can do if you or someone you know is suffering from obsessive-compulsive disorder.

As we explained above, OCD is a disorder characterized by intrusive anxiety and behaviors that help to manage that anxiety. However, we can deepen our understanding of OCD by breaking down its name.

Robb explains, “Obsessive-compulsive disorder is a condition that involves a pattern of unwanted, unhelpful thinking that is driven by anxiety, called an obsession. For many, that obsession also involves a burdensome behavior that attempts to reduce the anxiety in repeated and time-consuming ways, called a compulsion.”

Most people have troubling thoughts and feelings of anxiety from time to time. However, people who have OCD tend to feel anxious much more frequently and for reasons that seem unnecessary or excessive to others. “Both obsessions and obsessive-compulsive patterns become very difficult to stop and interfere with the person’s ability to function and feel internally safe,” Robb adds.

Many people who have OCD first experience symptoms in childhood, with most being diagnosed by age 19. The disorder tends to be equally prevalent among women and men and across different races and ethnicities. Although the causes of OCD are still unknown, it does appear to have a genetic component, as individuals with a parent or sibling who has OCD are more likely of developing OCD themselves.

OCD can be easier to understand if we also look at some of the ways it commonly presents itself. Specific obsessions and compulsions vary from person to person, but they do tend to fall into some commonly identifiable categories.

For example, some common obsessions among people with OCD include:

Some common compulsive behaviors in response to these obsessions include:

As we mentioned above, the COVID-19 pandemic has only worsened obsessions and compulsions for some people with OCD, especially those whose anxiety revolves around sickness and contamination. Robb explains,

“At its core, OCD is about anxiety and one’s sense of safety, wellbeing, and balance, as problematic thought and behavior patterns organize safety for the individual in a world that is perceived as having dangers. COVID presents the world with legitimate dangers that make it imperative for us all to stay safe and healthy. For example, an individual with OCD who is concerned about germs and contamination repeatedly washes their hands; to them, COVID now gives something ‘legitimate’ to obsess about, and they increase handwashing behavior to attempt to relieve the distress. We all have been told to hand wash more frequently, but the individual with OCD perceives the impact with amplified distress, as there is no doubt to the dangers of COVID contamination. And for many, increased safety behaviors and rituals actually maintain that distressing anxiety instead of quenching it.”

How Can OCD Be Treated?

Obsessive-compulsive disorder can greatly impact an individual’s quality of life, and there is currently no cure for the condition. However, there are several forms of treatment that can help a person manage their troubling thoughts and behaviors.

“OCD can be treated with behavioral, cognitive, and sometimes medication-based treatments,” Robb explains. “Successful treatments allow individuals the ability to examine their thoughts and behaviors in a safe environment.”

For example, cognitive behavior therapy (or CBT) is one of the most common forms of treatment for OCD. This type of therapy helps a person learn to recognize their obsessive thoughts and resolve their anxiety without engaging in a compulsive behavior. A specialized type of CBT called Exposure and Response Prevention may also be used, which involves controlled exposure to situations that trigger compulsions in order to help a person become desensitized to these triggers.

“Learning cognitive-behavioral strategies, such as thought-stopping techniques and grounding techniques, helps many people gain control of patterns that seem to run against their will,” Robb adds. “Other treatments, such as Internal Family Systems, involve exploring how the mind and body seek safety by developing patterns of functioning intended to safeguard their self from underlying exiled feelings.”

If cognitive and behavioral therapies are not effective at reducing symptoms, a person might also be prescribed medication. Certain medications known as serotonin reuptake inhibitors (SRIs) and selective serotonin reuptake inhibitors (SSRIs) can help reduce the intensity of obsessive thoughts and compulsive urges. In very specific cases, antipsychotic medications have also been shown to help certain people.

Finally, in cases where traditional therapies and medications do not achieve the desired results, several “add-on” treatments may be considered. One of these is transcranial magnetic stimulation (or TMS), which uses magnetic fields to stimulate specific nerve cells in the brain.

Although it is less common than other mental health disorders like depression and generalized anxiety, obsessive-compulsive disorder still affects the lives of 3–4 million people in the United States alone. Although this disorder is long-lasting and can greatly impact a person’s quality of life, it is also treatable through therapy and medication. With the appropriate treatment, and individual with OCD can learn to live a full and rewarding life despite their challenges with obsessive thoughts and compulsive behaviors.

If you would like to speak to a mental health professional about receiving treatment for OCD, we invite you to call us at (888) 714-1927. With the right help, you or your loved one can recover from OCD and take back control of your life.